on July 23, 2019
The other thing I did today was I maxed out my team on the Raid Boss event before using anymore sigils up on battles. I did that because the fights get steadily harder and I was getting into territory where the fights were challenging.
A quick and dirty run down:
You need to complete the first ten battles before you can collect Rewards. Even if your team is racking up loot, you can't get to it until you've completed the first four stages, which is a total of ten battles.
It's generally a good idea to buy up to the event weapon at Tier III and to use whatever boss slaying troop is available, which seems to usually be a new troop introduced that week. You can get copies of it from the Raid Boss Shop and, I think, sometimes Event Keys or Glory purchases. 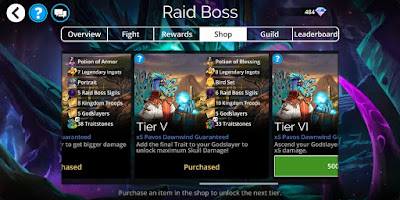 I was rolling in gems and needed help getting the necessary traitstones to purchase Traits for troops on my team, so I bought up to Tier V instead of just Tier III like I usually do. 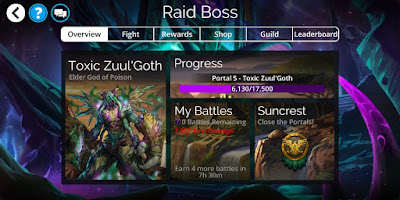 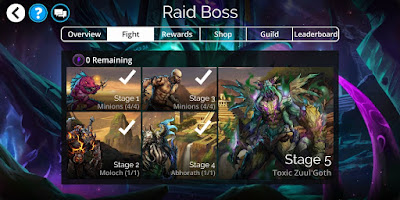 Fight screen showing check marks on the first four stages because I completed them previously. Below is a picture of Tier III where you get the weapon. 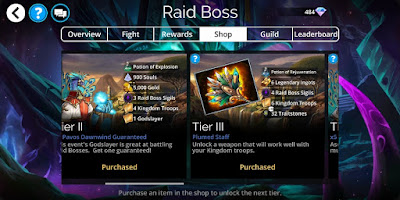