on August 31, 2019
These are just a couple of screenshots of my latest SimCity city. It's at more than a half million people. 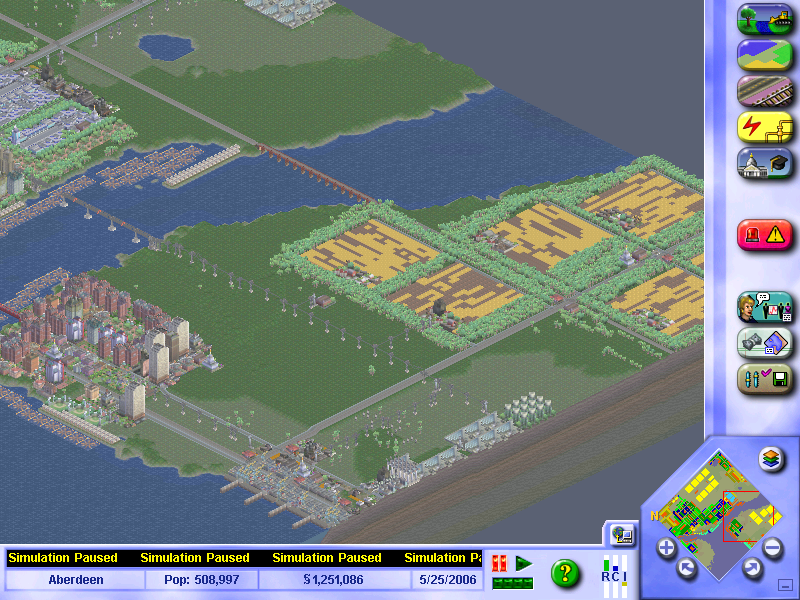 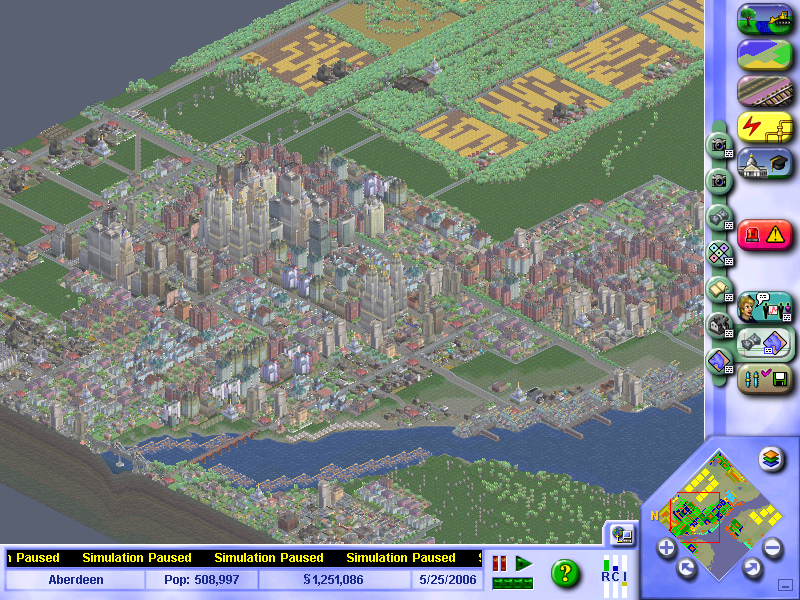 There are rail roads, streets connecting to neighboring cities, two harbors, an airport, and a few boulevards (where you make two rows of road so it's like a four-lane road). What you won't see is a "highway." In other words, there is no limited access interstate-style road on the map.

It occurred to me the other day that I tend to not add interstates to my SimCities. I keep trying to add more bus stops, more commuter rail, sometimes some subways (not on this map so far, though).

I named this SimCity Aberdeen. I don't remember my logic anymore. It doesn't look anything like the real Aberdeen where I currently live, which is a small town of about 16k people.

But it occurred to me within the past 48 hours that the real Aberdeen where I really live also has no interstate. It has rail and there is a small airport ten minutes from downtown and there is a confluence of three highways that aren't limited access roadways like an interstate would be.

If you think of the map of a SimCity city as more like the county, not the city, then you can make further comparisons. This county has a deep harbor, though it isn't in the city of Aberdeen.

And then it occurred to me that my last city -- the last real life city where I lived as a homeless person, before moving here to get off the street -- was Fresno. When I lived there, it was about a half million people, making it the largest city in Fresno County, 5th largest in California and 34th largest city in the United States. (It's gone up to about 530K.)

That means there are entire states that don't have a city that big. In fact, the entire state of Wyoming -- our lowest population state -- only had about half a million people total the last time I looked. (It's since gone up and is estimated to be 577K.)

Nonetheless, Fresno -- which has an international airport -- has no interstate running through it. It does have limited access state highways, but no interstate.

From Wikipedia: Fresno is the largest U.S. city not directly linked to an Interstate highway.

I gave up my car more than a decade ago. I had always wanted to live without a car, but couldn't make that work until I got divorced.

I have never really liked driving. "Good riddance" and all that.

Although I am well aware that interstates can drive development, I tend to see them as a blight on the local landscape. They have a bad habit of cutting things up and creating dead zones.

Interstates are designed to speed people to their destination with as little stopping as possible. They have their uses, but they don't do a cityscape any real favors, I don't think.
SimCity